For as long as I can remember, I've had my ear lobes pierced. According to my parents it was done when I was a couple of months old and till the age of 19 that was the only piercing I had.

Something about university invoked in me feelings of rebellion and independence of the like that I had never experienced before.

So, I developed a trend of coming back home after each semester with a new "surprise" for my parents

I got my nose pierced. 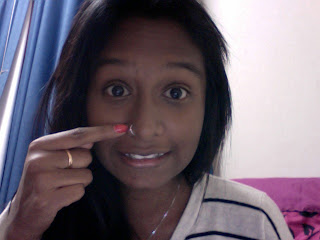 The fact that I put a ring in it only served to enhance the surprise :)

I decided that it was time to finally get the tattoo that I had been planning for 2 years. 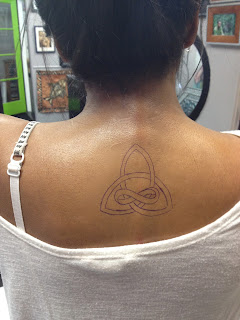 That's only the outline of it. I'll post a complete version and the meaning behind it later.

I'm going to get my helix pierced. After my nose piercing and tattoo, one would assume that I wouldn't be nervous.

You Tube doesn't help either.

I'll post a photo when the deed is done.


For those of you considering either a nose piercing or a tattoo and you're worried as to how much it'll hurt, I'll say this. If I can get them you definitely can!

For my nose piercing, it was done using a gun and it was, I kid you not, just a sharp pinch. Cleaning it and taking care of it did cause a teeny, tiny bit of pain but it was nothing unbearable at all. I was quite pedantic about my piercing and I cleaned it about twice a day using tea tree oil. You can also make up your own salt water mixture to clean and it'll work as fine. I was asked to continually keep turning the piercing while it was still healing to prevent the skin from healing over it but these are instructions that you'll get from the piercing parlour. So, a nose piercing = a piece of cake.

As for my tattoo, it was more painful then the nose piercing without a doubt. In the photo, you just see the outline of the tattoo, and that part didn't hurt at all. It literally felt like something was scratching on my skin but it was more of an annoying feeling as opposed to a painful one. I also got it shaded in and that's the part that really, really hurts. But, it was still bearable and your tattooist will take things as slow as you need it to be.

Don't forget that a tattoo is permanent so before you get it done, make sure you research the best place to go too. I know most of you are worried about how much it'll cost, but remember, if you want a nice job, you sometimes just have to pay a bit more for it. Also, don't be shy to ask your tattooist to draw out your design. Remember that it is permanent and you want to be 100% happy with the product that is going on your skin. I personally advice you to go in to a couple of places and then settle on one that gives you the most confidence.

If you're thinking of getting a bigger piece then what I did done, you could also ask to see the tattooist's portfolio just to get an idea of his/her strengths. If on the other hand you're thinking of a smaller piece, like a cross, you don't have to be as pedantic about picking the place but remember make sure that it's completely hygienic because you don't want to pick up some incurable disease.

That's all that I can think of. If you've got any further questions, please feel free to post a comment. Also, do leave a comment on what piercings/tattoos you guys have had done and how did you find them? :)

Please do leave a comment or questions! I look forward to reading them :)